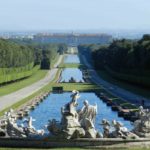 Don’t miss the chance to visit the splendor of the Royal Palace of Caserta and its park, treasures of truly incomparable splendor.

Italy’s swansong to the baroque, the colossal Reggia di Caserta began life in 1752 after Charles VII ordered a palace to rival Versailles. Not one to disappoint, Neapolitan architect Luigi Vanvitelli delivered a palace bigger than its French rival. With its 1200 rooms, 1790 windows, 34 staircases and 250m-long facade, it was reputedly the largest building in 18th-century Europe. Be enchanted by the beauty of its interiors and by the magnificence of its exterior.

Stroll in the gardens to see the great waterfall and romantic oasis of intricate pathways, exotic flora and pools. The park covers 120 acres, with long avenues and many buildings that can be explored on foot, by bycicle or by carts.

If you are still fascinated by the hidden history of the area, you could also consider organizing a fabulous day by visiting the Amphitheater where legendary gladiator Spartacus once fought and where he started his famous slave uprising which shook southern Italy for several years.

Located in Capua, just few minutes away from Caserta, the site was used to build the largest amphitheatre in western Europe after the Colosseum, an extraordinary theatrical venue that could hold up to 60,000 spectators. Originally 44 metres high, the amphitheatre had four floors, built entirely using a stone called “tuff”.  The arena was the setting for the scenery and props, the stars and technicians of the shows, ferocious beasts, gladiators and ritual areas.

Otherwise, for an afternoon of retail therapy, why not visit the La Reggia Designer Outlets, with a wide range of over 100 multi-brand as well as boutique stores. The La Reggia outlets are the  perfect place to shop, with reductions of up to 70% all year round, there’s bargains to had for everyone.